Erin Aylward: “It’s scary. It seems every time you turn on the TV another cut is being made.

DEBBIE TRINIER DOESN’T THINK MUCH OF JASON KENNEY. No more than any of the over 400 Albertans in the standing room only crowd in Edmonton on December 2.

“I’m not a very happy Albertan,” said the retired teacher. “I think Kenney is a bit of a loose cannon, a bit out of control, and I just think that this isn’t what the Alberta people voted for.”

The meeting was part of the opening salvo in the Alberta Federation of Labour (AFL) campaign calling on all Albertans to “Resist Kenney’s Cuts. The Edmonton meeting followed November meetings in Lethbridge and Calgary.

“Every time we have a meeting, the support for the campaign just grows and grows,” stated AFL president Gil McGowan.

Kenney’s first budget calls for sweeping cuts that leave little in government untouched: from deep cuts to major programs like education and health, to cuts to minor programs that do things like hold down student tuitions or provide a few dollars in income support to the disabled poor. Nothing was spared. Few in Alberta will be left untouched.

Meanwhile, Kenney’s corporate cronies are laughing all the way to the bank. The Tory government plans to slash corporation tax rates from an already low 12 percent to just eight percent during their first term in office.

Patrick Jones was one of the first workers to be hit by Kenney’s cuts. He worked as a an engagement assistant at the University of Calgary until he was let go after the university learned of the cuts to higher education funding. He’s temping as a server over the Christmas period, but he’ll have no income come January.

“I was actually saving to go do my masters degree next year,” he said. “I don’t think that will happen anymore. It puts into question the feasibility of my future in Calgary and this province. I’m not sure if I should stay or go. I can’t afford my apartment for much longer.”

Jones is far from alone. Calgary’s school board announced that it intends to lay off 300 temporary contract teachers.

The AUPE (Alberta Union Public Employees) expects licensed practical nurses, workers in laundry operations, and healthcare aids to lose their jobs. “I’m telling our locals to prepare our members for potential strike action,” said AUPE president Guy Smith. “There are already members that, I think, would go (on strike) right now.” The union estimates that by the time Kenney is done as many as 250,000 workers will have lost something.

The government also wants to eliminate the equivalent of 500 nursing jobs. Heather Devine says she would be ready to strike to stop that from happening. Heather is a registered nurse. She says she’s terrified to think about the damage these cuts would bring.“When you start cutting jobs that starts affecting patients. That starts affecting our homecare clients, and it’s dangerous. People are going to die. That’s the bottom line.” 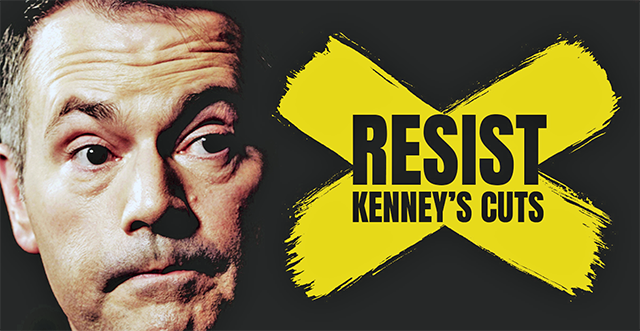 If desire, determination and effort matter, the Resist Kenney’s Cuts campaign will grow from strength to strength to become too strong and real for Kenney to ignore. Early strong public support even makes the predictable calls for a general strike seem like less of a stretch.

At the Edmonton “Join the Resistance” meeting, the AFL’s McGowan and AUPE’s Smith were joined on the platform by Heather Smith, president of the UNA, Mike Parker, the president of the Health Sciences Association of Alberta, Tom Hesse, president of the United Food and Commercial Workers local 401, and Lee-Ann Kalen of the Canadian Union of Public Employees Alberta Region.

The Join the Resistance campaign includes all 29 unions affiliated to the AFL, which in total represent around 180,000 workers.