DIVIDE AND CONQUER is a strategy as old as time. We think of scientific management and Taylorism, a novel idea in the late 19th century workplace. Jobs and assembly lines were divided up into each of the tiniest parts, so that the best low-skill worker could suffice. Organizational focus shifted from the artifact to professionalizing the managing and control of the process. Unfortunately, this divide and conquer history in industrial life was actually much dirtier than that. It didn’t stop at machines and it did not stop a hundred years ago.

In their 2017 editorial introducing the book Against Labor, historians Rosemary Feurer and Chad Pearson argue that, historically as well as today, employer activism suppresses worker and union rights. And its done for the sole purposes of legitimacy, dominance, and profits.

Just like workers collectivize to pursue their interests, so do employers

Just like workers collectivize to pursue their interests, so do employers. It seems only rational. Feurer and Pearson offer the book as a contribution to trace and analyze how employers in the US have organized throughout the last hundred years in continual efforts to render workers vulnerable and squash unionization, all in the name of pursuing their objectives.

And much of it occurs by stealth, to unsuspecting workers like Mr. Block. Mr. Block was a character created in 1912 by cartoonist Ernest Wiebe of the Industrial Workers of the World union (IWW). Mr. Block was a satirical character used to decry the ignorance of workers to the strategies employed against them by business owners. 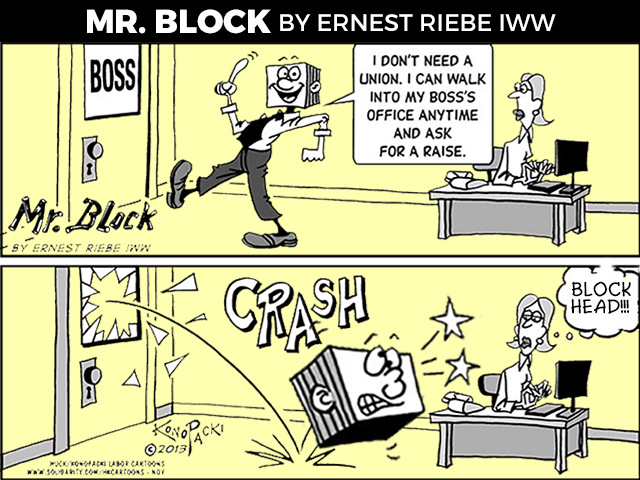 According to chapter one authors Elizabeth Esch and David Roediger, Block was “a clueless, conformist, antihero whose sufferings resulted from his misplaced faith in the beneficiance of capitalists, politicians, and police, a faith that workers would have to shed to make a revolution.” Like a dum-dum, worker Block falls all over himself to acquiesce thinking that he’s moving himself forward when in reality his blindness to what is going on is helping sustain the system that keeps everyone down.

All manners of Block need to be aware of and learn from history if workers want to hold their own, let alone make progress. Marx introduced the idea of the working class as a big clump exploited by the owners of production. But Lisa Lowe pointed out in her book, Immigrant Acts that downtrodding also occurred through “the social productions of difference, marked by race, nation, geographic region, and gender.” This is still true; undervalued gendered and racialized occupations, sectors, and global work systems characterize today’s industrial and capitalist economy. Those in control in government, in the system, and even in the workplace continue to employ the “tools of difference” which, if not laid bare, act as poison to workers’ interests and organizing.

Some differences can’t be helped but form part of the mix; boomer, generation X, millennial, generation Z, and soon Alpha. Some male, some female, some select. Some blue, some orange, and some green. Some taller, some shorter. Some single, some married, with kids and kidless. Some healthy, some sick.  Some louder, some quiet, and some strong, some weak.

Yes every workplace has differences. It’s how the workplace and the people in it approach its differences that matters. Setting up the work characteristics is a factor of management. Then the policies, norms, and practices govern the synergy and drive perceptions of these differences. Setting up as many differences as possible and capitalizing on them follows the theory put forward by Lowe almost a century ago. It is a strategy used to get maximum effort and compliance from workers.

Workers need to see their commonalities and support each other to survive, let alone win. But first they should remove their blindfolds. No more Mr. Block.

Terri Szymanski is a health and safety officer with the Ontario Public Service Employees Union. She has a masters degree from McMaster University and is currently teaching “Stress, Health and the Workplace” at Laurentian University. Terri has also worked as a corrections officer.