MONTREAL IS NOT IN THE USA. That reality could make all the difference to the workers who want to join a union at the Amazon warehouse in Lachine, Quebec.

The Montreal Amazon Workers’ Union (MAWU) began their drive to give the workers in Lachine that option in May. They may well succeed where others have not.

“Obviously they think they are in the United States of America,” says David Bergeron-Cyr, vice president of the CSN (Confédération des syndicats nationaux), which is working closely with the MAWU.

“The Amazon managers don’t get that they are in Quebec. Because they keep interfering with the organizing drive—and in Quebec that’s completely illegal.”

CSN has sent two lawyer’s letters to Amazon regarding their illegal intimidation tactics, as well as filing official complaints with the Administrative Labor Tribunal.

Manuel Tapial works in the warehouse. He was the first person to begin organizing there. He was also the first worker to come under intense surveillance and intimidation from Amazon for his activism. He is now the coordinator of  the MAWU drive.

“They are attacking the union inside the facility and threatening the workers saying, ‘If you join the union, you will lose your benefits,’ said Tapial. “I got two final written warnings.”

Tapial says Amazon surveillance is unlimited: in one instance the details of a break room conversation that he had with a co-worker in Spanish, his mother tongue, was reported to management.

Tapial said this is a very clear sign that Amazon is warning him to be careful.

Intimidation tactics have also come in the form of advertising and in email messages. Messages from Amazon tell workers: “It is your fundamental right not to sign or to say “no thank you,” or “I am not interested.”

Posters have also popped up around the Amazon location urging workers to reject the MAWU invitations to sign union cards.

The fact that the majority of Montreal Amazon workers are immigrants adds extra impact to Amazon’s illegal and brazen intimidation tactics. 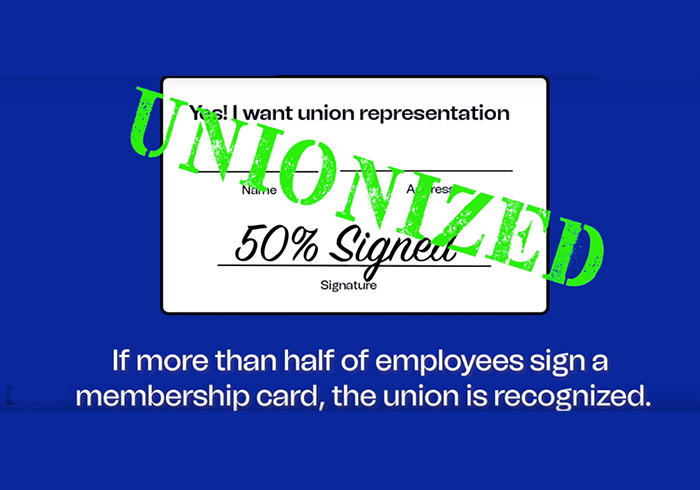 Certifying a union in Quebec is far more straightfoward than in most other provinces. In Quebec the union does not have to prove it has enough support to apply for a Labour Relations Board supervised vote to confirm worker support.

All that is required in Quebec is a “card check”: a one-time approval by a simple majority of the workers in any workplace. That means that once at least 50 per cent of the 250 to 300 employees at the Lachine warehouse sign a MAWU membership card, the union can apply to the Quebec Labour Relations Commission to certify the union.

Tapial says the MAWU expects to have enough signed cards to do that soon.