YOU WERE MEANT TO MISS IT. Workers and their unions striking to support Black Lives Matter was never going to make the news. But it did happen.

Tens of thousands of workers in more than 200 cities across the USA participated in their “Strike for Black Lives on July 20.

Many unions and social justice organizations actively supported the strike, including the Service Employees, the Teamsters, the Amalgamated Transit Union, Unite Here, the United Farm Workers, the Communications Workers, the United Food and Commercial Workers Union, Jobs With Justice, the A. Philip Randolph Institute, the Labor Network for Sustainability, Fight for $15 and a Union, and the National Domestic Workers Alliance, along with others.

“We are living through a pivotal moment in global history that will determine the future of our nation,” said Amalgamated Transport Union (ATU) President John Costa, who said all his union’s 200,000 members would strike at noon local time for eight minutes and 46 seconds, the length of time the George Floyd murder took.

Where work stoppages were not possible for a full day, workers picketed during lunch breaks or stopped work to observe a moment of silence to honor Black lives lost to police violence.

McDonald’s cooks and cashiers in Los Angeles and nursing home workers in St. Paul were also striking. Workers also rallied outside the Massachusetts Statehouse in Boston. 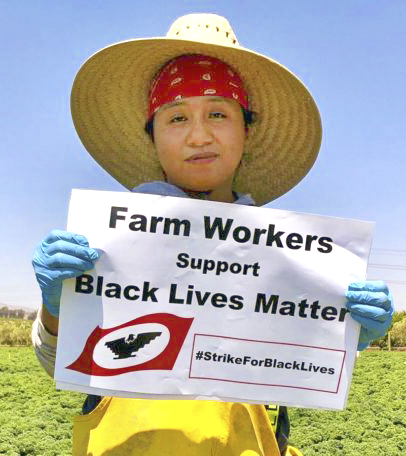 In New York some 100 people marched outside the Trump International Hotel to demand the adoption of the HEROES Act, legislation that would provide financial aid to households struggling during the coronavirus pandemic. Strikers in front of the Capitol Building in Washington DC voiced the same demand.

The House of Representatives passed the act in May, but the Republicans in the Senate have blocked it.

Nurses, doormen and cleaners in New York were among the strikers who demonstrated in sweltering heat. “We are the ones who have kept the economy going and have kept everybody safe and in NY specially have kept the numbers down. We should be respected and compensated for that,” said 42-year-old doorman Jordan Weiss.

“We’re just being overworked and underpaid, and it makes you sometimes lose your compassion,” said nursing aide Toyai Anderson, 44, who planned to walk off her job for two hours at Hartford Nursing and Rehab Center in Detroit.

Strikers also picketed the Kentucky office of Republican Senate Majority Leader Mitch McConnell, who uses the power of his senate position to block the HEROES bill.

“Now is not the time to be observers on the sidelines. Now is the time to rise up together to inaugurate a new day of racial and economic justice for all,” Costa said.

Justice Favor, 38, an organizer with the Laborers’ International Union Local 79, which represents 10,000 predominately Black and Hispanic construction workers in New York City, said he hopes that the strike motivates more white workers to acknowledge the existence of racism and discrimination in the workplace.