The showdown came in February, after Frito-Lay again raised prices on all its snack foods. Loblaw said the increases were uncalled for and would not pass them on to its shoppers. Frito-Lay stopped shipping its products to Loblaw on February 18.

So, even Loblaw knows there are limits to “how much the market will bear.” They are happy to push consumers to the limit—but not over it. So, they pretend to share our worries about price gouging and inflation—even though inflation actually helps them in two big ways:

Get richer without trying

Business bleats a lot about the evils of inflation. And, it is true that inflation “erodes debt”: it reduces the value of return to lenders, because the inflationary dollars we use to pay back debt in 2023 are not worth as much as they were when we borrowed the money in 2022. Lenders lose out a little on the apples—but they more than make up for it on the oranges..

In fact, a deeper truth is that inflation is good for all who are active business players in the economy: that is, “the entrepreneur class of capitalists” as John Maynard Keynes, the Yoda of classical economics, called them in his 1919 book The Economic Consequences of the Peace.

In this book Keynes calls them “profiteers” who cannot help but make out like bandits during inflation. He writes they are the ones “who in a period of rapidly rising prices cannot but get rich quick whether they wish it or desire it or not. If prices are continually rising, every trader who has purchased for stock or owns property and plant inevitably makes profits.”

There is no better proof of this reality than the extra billions in profits raked in by business large and small during the pandemic years of 2020 and 2021.

But, they are not stupid. They know too much inflation will make life impossible for all of us who work for a living. And that could lead to big trouble for them. Like  trying to explain why paying us more is not possible, since prices—and their profits—are going through the roof.

That’s what they did in 1978 and again in 1982. They used a phony inflation fight to keep us from demanding raises to keep ahead of rising prices.

Food prices were going through the roof in late 1972. Food prices were shooting up by 14 per cent annually—five times the rate typically seen during the 1960s. Prime minster Pierre Trudeau asked Beryl Plumptre to look into it in May 1973, as head of the Food Prices Review Board.

The Food Prices Review Board was officially disbanded on October 14, 1975. It had lasted for a little over 28 months. And, true to Beryl Plumptre’s words, it had done nothing to change the high cost of food.

Anti-Inflation Board:
wage restrictions for all

By 1975 our inflation rate had climbed to 10.9% and showed no sign of stopping. Pierre Trudeau decided to bring down the hammer. He did it in December 1975 with an Anti-Inflation Act. The act gave the force of law to wage and price controls.

Wage increases were to be restricted to 10% during the first year of the program, and then 8% and 6% during the following two years. These restrictions applied to all federal government employees and employees of companies that employed over 500 workers. The implementation of these policies was overseen by the Anti-Inflation Board (AIB). The board could recommend the reduction in prices of consumer goods, wage rollbacks and rebates to customers of various services.

In reality the AIB imposed wage restrictions on every single working person in Canada, while price rollbacks and rebates were few and far between.

By 1978 the effects of the controls were viewed as a failure and were phased out. Within a year the anti-inflation board was dissolved.

The program was generally disliked by Canadians and the government intrusion into the economy brought many unforeseen results which created more difficulties than it solved.

By 1982 desperation was setting in. Interest rates and inflation were still in double digits. The public expected the federal government to do something. It came up with the “six-and-five” program. It was part compulsory and part voluntary.

The compulsory part targetted 500,000 federal government workers: legislation held their wage increases down to six per cent in 1982 and five per cent the next year. The voluntary part was calling on other governments and private business to follow suit. Calling on workers to voluntarily settle for six per cent wage increases—even while living with double-digit inflation.

A few businesses kind of did. Even some unions. But not enough to make any real difference. Trudeau said his failure was all our fault. We simply were not ready to get our minds right. 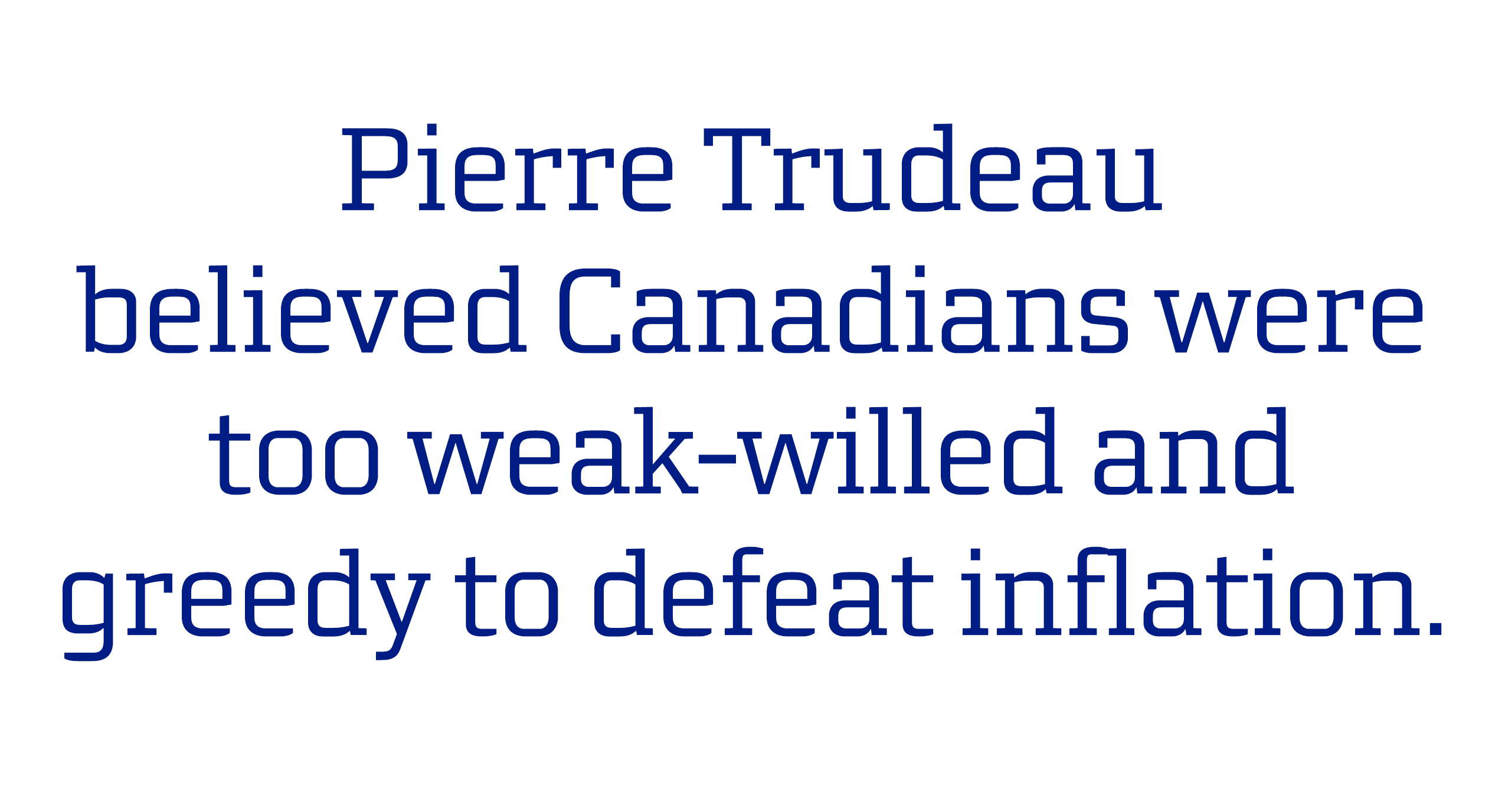 Trudeau told interviewers that inflationary expectations were symptomatic of anti-social behaviour driven by selfish economic institutions, key among them “the big unions” who were “trying to get a big slice of the cake and pass on the results of their greed to the little people.”

A leaked document, from just before Trudeau initiated his last round of anti-inflationary measures (the 6&5 Program) was frank: such programs were not about inflation, but wage depression. The document acknowledged that Trudeau’s first round of wage and price controls from 1975 to 1978 (the Anti-Inflation Board) did little to actually control prices, but did a great job of lowering wages.

The purpose of the 1982 6&5 Program—which only directly affected workers in the federal public sector—was to prevent them from catching up on all these years of lost real incomes since the 1975 controls came in. We can’t fall for it again

“If you let them fool you once, shame on them. If you let them fool you twice, shame on you.” That’s vintage Tommy Douglas from 1948. It was good advice then; it’s great advice now. Because the wheels are in motion. The 99% are greasing the skids and are bound to use inflation to stalk us down and get us to “be reasonable” and “lower our expectations” and, above all, to not expect wages to rise to match prices.

We have to act to avoid that trap says Sam Gindin, who was research director of the Canadian Auto Workers from 1974–2000. We have to “reframe the narrative”, he says. Gindin details how we can do that in a recent article in Canadian Dimension magazine.

Gindin points out that the real issue is not inflation itself but, as reported in the Wall Street Journal, “the struggle is on over who will bear the burden of higher costs.”

Gindin writes that what bankers and employers fear most is: “...the threat that the current price hikes may signal a dangerous future inflation. If economic actors—and above all, unions and the working class—try to protect themselves from inflation, we will be back, they fear, to the dilemmas of the 1970s."

What the elites fear most, writes Gindin, is: “...that these frustrated workers might suddenly convert unions’ long-standing weaknesses into successful inroads toward getting workers their piece of the pie—or more."

Fighting inflation then stops being a technical problem for central bankers to sort out, says Gindin, and become a “class conflict over distributional priorities.” That is, who gets to decide who gets how much.

Gindin writes: “The challenge is to find, in this moment, the openings that allow for an alternative narrative that deepens popular understandings of capitalism, encourages the kinds of struggles that can radicalize workers, and contributes to building the working class into a social force independent of, and able to, challenge capital.”

Gindin concludes: “We must intervene because we must see every crisis as a moment of both dangers and openings. It is the responsibility of the left to not only try to limit the damage, but also to build toward a new world.