THE COCKROACH POSTER made it plain. The 23 tenants at 12 Lansdowne Ave. in Toronto were no pushovers. They were gong to make their fight to avoid evictions something else again. They did. And it worked.

The threat of mass evictions are gone. The landlords notified the tenants on April 19 they were not going to pursue the notices of eviction they had sent out to them in January.

The tenant response to the eviction notices was unanimous and immediate: they would unite to stand up for themselves and fight for their homes.

The eviction notices were supposed to allow the landlords to renovate and then allow the tenants to return. But the tenants at 12 Lansdowne didn’t believe it. They knew the landlords, Neil Spiegel and Evan Johnsen, had  used the same tactic to force tenants from another apartment building they owned. The cockroach posters were the result. 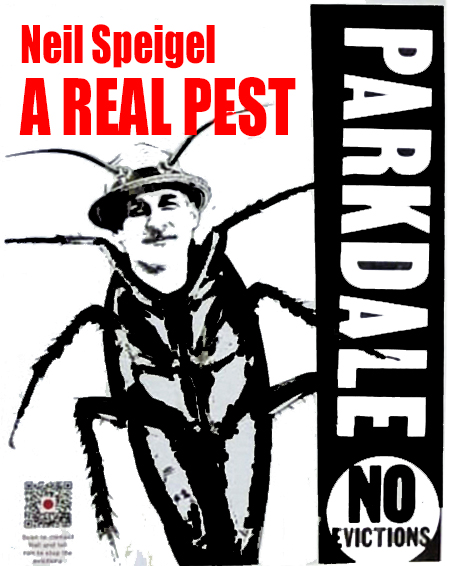 The tenants plastered the Parkdale neighbourhood with posters that named each landlord and put their face on the body of a large cockroach, with the messages: “Parkdale has a pest problem”, “Evan Johnsen: Stop the Evictions” and “Neil Spiegel: Stop the Evictions”. The posters asked local residents to call the landlords to ask them to lift the threat of evictions and so rid the neighbourhood of its “pest problem.”

“What we learned by coming together as a building is that we have more power than we realized,” says Cordelia Huxtable, who has lived in her unit for seven years.

Parkdale Legal Services and Parkdale Organize also supported the tenants. This outside support was significant. “There were many times when it got really intimidating—having clear-headed people who are outside of it, who can be like, ‘No, this is normal,’ is so important,” said Huxtable .

But David Bell, a member of Parkdale Organize said a majority of the work was done by the residents themselves. Bell says getting to know your neighbours is a key step in getting and staying organized.

“I think a lot of us get used to city living where you’re in a building and you don’t really know your neighbours,” Bell said. “But actually having conversations, whether it’s in the lobby or in the elevator, and finding out if the issues that you’re having are also being faced by other tenants is key.”

“I think the number one reason for the success of 12 Lansdowne was their commitment to working as a collective and not letting themselves be individualized,” Bell said.

When tenants were asked to communicate with their landlords or lawyers individually, they almost always declined, Huxtable said, instead opting to communicate as a group through writing, if possible.

A key turning point came when Parkdale Community Legal Services, discovered the landlords had failed to file the correct paperwork, meaning the eviction requests were not formalized and had no legitimate eviction date set.

The landlords were left with no choice but to withdraw their eviction demands.

“Landlords can attack us legally. They can attack us with scary letters [and] with their money. And the Landlord and Tenant Board is basically set up as a factory to evict people. The only defence that we have is organizing together.”

“Landlords like to say that we’re taking these things too far, but they’re the ones that are trying to push us out of our homes, and I can’t think of anything worse than losing your home.”

“At the moment, we’re all safe from being homeless, which is a pretty wonderful thing compared to how we were feeling a couple of weeks ago,” said Kim Breland, a tenant at the complex for 12 years. “It is, of course, not over. We don’t know what curveballs they have planned for us next.”

But, no matter what the landlords have planned Breland is confident the solidarity and common bond of the tenants at 12 Lansdowne will, once again, keep them safe and sound in their homes.