IT’S A SIMPLE FACT: the only way to make sure your truth gets out, is to tell it yourself. That's exactly what the residents who live in the Ottawa neighbourhoods occupied during the truckers’ convoy last winter are doing.

Many of the residents gathered in the basement auditorium of Ottawa’s downtown public library, on June 27, to launch the Ottawa People’s Commission on the Convoy Occupation. Three commissioners will lead consultations and public hearings to produce a report on how the protest impacted the city’s residents, businesses, and workers and how to make sure it can never happen again.

“Ongoing local and federal reviews of what happened in the national capital—and across Canada—during the past winter are barely scratching the surface of the dangerous, undemocratic and hurtful occupation that took place,” said Ken Rubin,  a member of the People’s Commission steering committee.

They are all far to “limited” and “inward-looking,” says Rubin. “They hardly address community concerns.”

Rubin also criticized what he sees as an expanding “overly dominant federal presence that has little concern for its inner-city neighbourhoods.”

Rubin said the commission will hear from “ordinary citizens, advocacy organizations and social agencies, business owners, workers, and others whose lives were turned upside down during the occupation.”

Rubin said the Ottawa People’s Commission has an expected budget of around $250,000, of which he has already contributed $25,000 alongside the Centretown Community Health Centre (CCHC). The health centre is also acting as the commission’s anchor agency and fundraising portal. The commission is also accepting donations through its website at opc-cpo.ca.

“I’m a policy analyst by trade and I always say we need to hear directly from communities for us to know what nuanced policy responses we need,” said Debbie Owusu-Akyeeah, one of the three People’s Commission commissioners.

“What hasn’t happened yet is that people-centred approach,” Owusu-Akyeeah said, adding that it was a “scary time” for residents then and now, especially with word that the protesters could return as early as June 30.

The Ottawa People’s Commission was launched less than a week after 24 Conservative MPs met with convoy spokesperson Tom Marazzo. 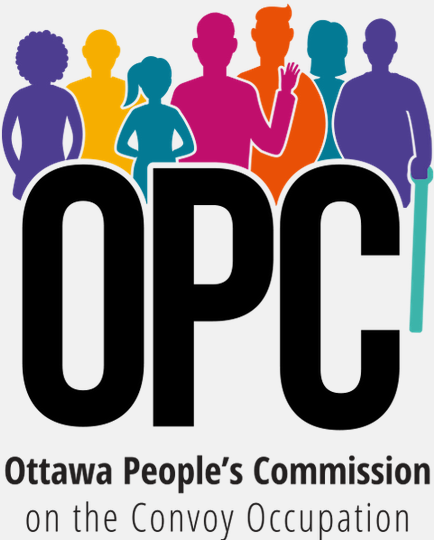 “We know that these convoy folks are empowered to do so again,” she said. “So the question that we have is: ‘What is going to be our collective response?’”

Owusu-Akyeeah identifies as a first-generation Black woman and “proud member of the [LGBTQ2S+] community.” She said, “I was deeply impacted just by the  physical presence of the convoy and what it symbolized, especially hearing some of the rhetoric, some of the hate and wanting to respond to it so that my community members are safe.”

“I know from the stories I’ve heard from my community members how unsafe they felt simply walking in their own neighbourhood,” she added. “I also know that those same marginalized people were right at the forefront of some of the most beautiful networks of community care. And that’s a story that needs to be heard.”

Owusu-Akyeeah said that many of the support systems and mutual aid mechanisms that the community put in place during the occupation in February remain in place. She said she feels confident the community will continue to “have each other’s back” if the city does see another re-occupation by protesters.

Rubin said that as the steering committee expands with more initiatives there would be more direct contact with “the powers-that-be,” but said it was those same powers that failed the residents of downtown Ottawa.

“So let’s start with ourselves and go from there,” Rubin said.