MARIA LOPEZ IS FINALLY FREE TO WALK AWAY. She wasn’t always. She used to be tied to one employer—no matter what. That’s how it is for migrant workers who come to work in Canada. They are held hostage by the people they work for—unlike all other workers in Canada.

One of the most important rights a worker can have is the right to walk away. The champions of supposed free market capitalism perpetually claim it as a bedrock principle of their system—the undisputed freedom of workers to pick and choose who they want to work for, or not work for.

A fight for freedom

Maria Lopez had to fight hard to win her freedom to walk away.

She is an agricultural worker from the Philippines. After experiencing abusive employers, she was eventually able to obtain an open work permit. She used her skills in English, documented the abuses she experienced and had the courage to stand up to immigration officials who could have deported her.

When migrant workers are bound to one employer, whether legally or through coercion or economic desperation, life becomes very difficult: they have no resources to fight on-the-job abuse, wage theft, sexual harassment or even to demand healthy workspaces during COVID-19. They are left virtually defenseless because their visas are tied to their employer, and complaining or speaking up can lead to immediate deportation.

Advocates and workers say this reality highlights a desperate need to move to a new system of open, or at least sectoral, work permits that would allow for workers to change jobs, a basic freedom that should be automatic for all workers.

“I’m very happy now that I have an open work permit, says Maria. “I’ve seen the difference ... when I’m working at [my new workplace].

“It’s very equal, especially in health and safety; and the supervisors there are very friendly and there is no bullying, no shouting. It’s nothing like the time that I was working with a closed work permit, in a week I’m working 86 hours and there is no overtime pay.”

Lopez says that the open work permit and better working conditions make a huge difference in her life: “It is so nice to me and helpful for me and especially to my kids because I have time to talk to them—unlike before when I would just go home and sleep. There was a time that my kids are calling me on messenger and I tell them ‘I’m tired' and I feel so sorry.” 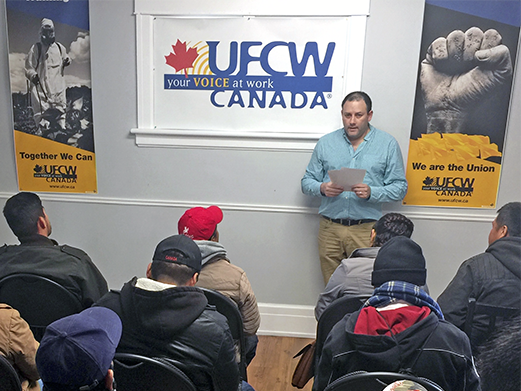 Santiago Escobar helped Lopez through the process of getting the permits. He is a National Representative for UFCW (United Food and Commercial Workers). Escobar and the UFWC have assisted over 100 migrant workers across Canada to document abuses and get the new open work permits—a process that requires extensive documentation.

Escobar says that some workers are forced to undergo stressful interviews with immigration officials in order to file for the open work permit. The process of documenting physical, sexual or economic abuse is stressful on workers. Escobar says while workers endure abuse of all kinds, a lot of it is systemic and difficult to pin down and document.

Getting an open work permit can also bring new problems. The open permits are for one year only. Many workers have trouble finding a new employer. And after one year, they are forced back into the same precarious status that they left.

Escobar calls the current one year open work permits “a band-aid solution”. He and other advocates are calling for open, or at the very least, sectoral work permits which would allow labour mobility and for the worker to change employers.

Economist Jim Standford says:  “Employers regularly take advantage of temporary and migrant workers who come from other countries to work in Canadian farms, stores, factories, and hotels. ... In theory, they are covered by the same minimum wage laws and other protections as Canadian workers, but in practice, those rights are often violated by unethical employers who know that migrants are too isolated and vulnerable to fight back.”

“Juan” is a migrant agricultural worker.  He says he was shocked by working conditions in Canada which were very different from what he was told when he was recruited for this job back in Mexico.

He spoke to CLI in Spanish, saying: “I never imagined I would be treated this way. I came to this country under a different contract, but when I got here they said the contract I signed in Mexico doesn’t mean anything here. Working in Canada is totally different to what I was told.”

He adds: “I would give the request to the federal government that unions should be mandatory. And we should have the right to join a union, because without a union we are treated like slaves, like animals and it shouldn’t be like this.”