LABOUR DAY JUST DOESN’T CUT IT. One day a year is not enough to honour all working folks have done, and keep doing every day, to make Canada work as well as it does for all of us. But, making that history—that truth— a visible, accessible and daily presence in our lives is not easy.

First of all, it is a history either scrupulously ignored or skimmed over and often carelessly represented. For example, the item “The First Labour Day” on the website Canada’s History passes off the 1894 law creating Labour Day as a national holiday as the natural result of a simple recognition of working people.

The fact is Labour Day was created as the direct result of unrelenting union activism verging on class war all through the 1800s that forced the federal government to make unions legal in 1872 and establish the Royal Commission on the Relations of Capital and Labour in 1889.

Hours and hours of graphic testimony from workers convinced the commissioners to strongly side with working people and their unions. They concluded: “The man who sells labor should, in selling it, be on an equality with the man who buys it.” The creation of Labour Day as a national holiday was one of dozens of recommendations meant to honour workers and improve their lives. It was the only one ever enacted.

Portraits on the hall of fame walls honour working class heroes from many times and places in our country. People like paper worker Baxter Fudge from Newfoundland, retail workers organizer Eileen Tallman Suffrin from from B.C., Canadian Labour Congress founding president Claude Jodoin from Quebec and coal miner J.B. McLachlan from Cape Breton. There is a grand sculpture of a sturdy worker with a jackhammer on a high stone base outside the building entrance. 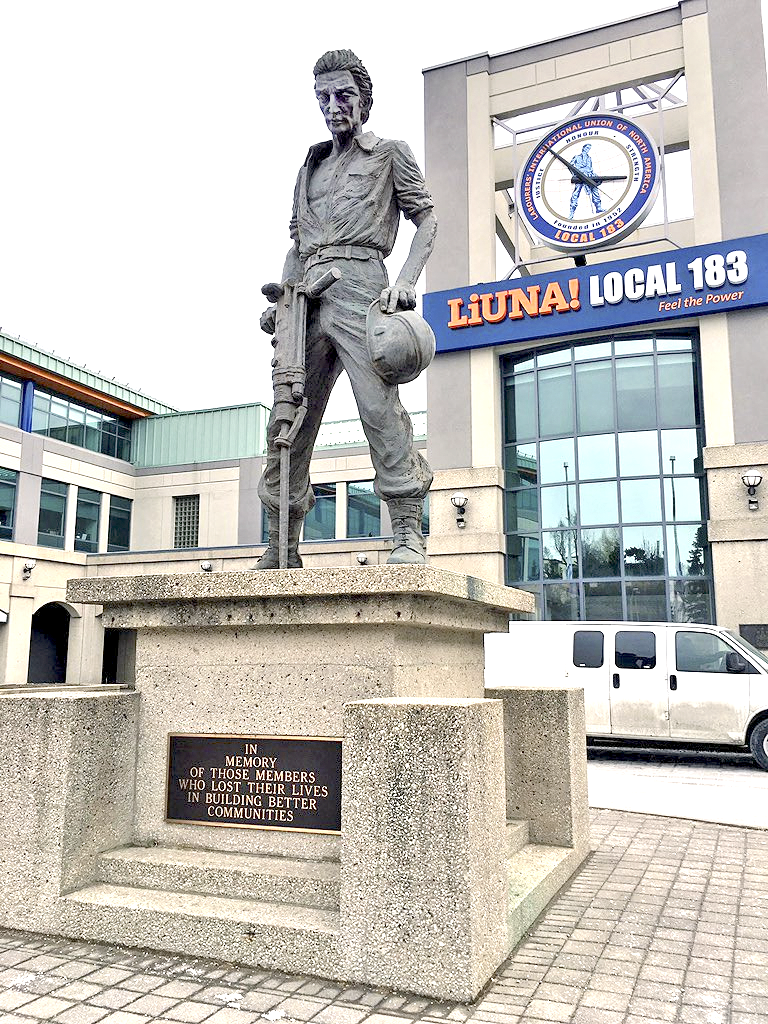 Statue at the entrance to LIUNA Local 138 offices

The hall is still there, on one of the upper floors of the union offices at 1263 Wilson Ave. in a busy shopping mall in Toronto. Not gone. But all but forgotten.

Not by LIUNA. But by the rest of us. Maybe because we don’t know. And, maybe because enough of us do not care enough.

A desire to remember

The centre website declares: “The Centre is more than a museum; its mission is to educate the public on the important role unions have played in the building of our city and the contribution that unions continue to make to the quality of the life we enjoy.”

The centre increased its community presence in 2011 when it installed a large and majestic work of art created by New Brunswick artists Fred Harrison and Darrin Byers. The sculpture sits in the centre’s courtyard as a very visible, impressive and striking public monument to workers injured or killed on the job. 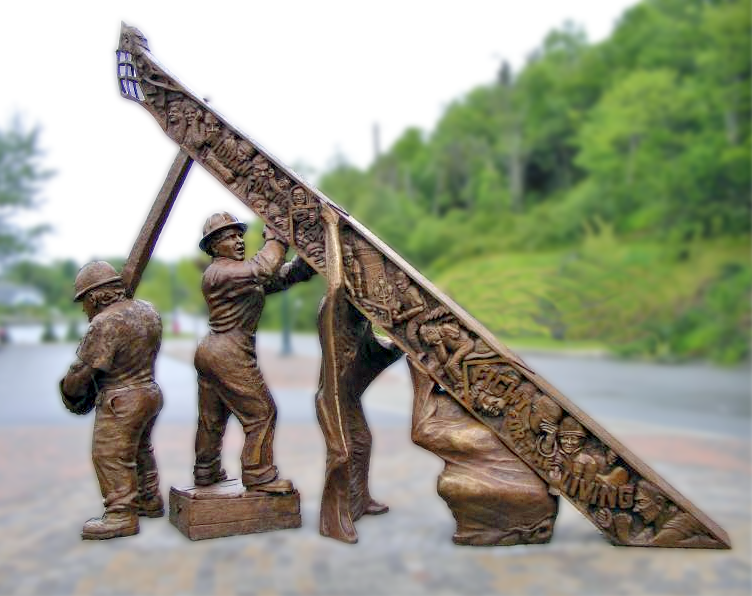 Monument in the courtyard of the  Frank and Ella Hatheway Labour Exhibit Centre in St. John, NB

Our desire to mark our own history as workers never dies:

There is a monument in Plymouth, Nova Scotia to mark the death by explosion of 26 miners on May 9, 1992 and another three In Springhill for miners killed down the mines there. Nova Scotia also has the imposing Glace Bay Miners Museum. Every province has something similar: monuments and markers big and small to mark all that everyday working folks have done to build the Canada we have today. And yet the total impact is somehow less than the sum of its parts.

There is no national inventory of all these sites. No person or body curating it all. No easy way to access our working class history. The article “Accessing Canada’s Labour History Through Museums” on the Labour and Working Class History Association website offers just five possibilities.

None of this should really surprise us. We live in a Big Brother world of 24/7 bombardment of mind-numbing consumerist and capitalist propaganda and mind warp. We are conditioned to never question authority and to underestimate our own self-worth. We are encouraged to accept life in a “We’re not worthy” summer rerun of Wayne’s World.

It’s no surprise that most of us get sucked in. The real surprise is that we don’t all get sucked in—that unions exist at all, that the Canadian Labour Hall of Fame does exist. But they do and we do. That’s all we need.

It’s up to us to build up and strengthen what we have; to make working class history in Canada easy to find and difficult to ignore.

We here at CLI have some ideas about how to do that. When they are ready you’ll be the first to know. Stay tuned!