HOW DO WE HANDLE THE TRUTH ABOUT WORK?  We ignore it.

We ignore the stark reality that working for a living for many of us—too many of us—is now a hellscape: a nightmare world of precarious work, usually low-paid, sometimes unpaid, often part-time; combined with grossly unfair and shitty working conditions and pay; all in the shadow of the ever-present threat of having your job snatched away to be shipped offshore to some country in Asia.

We ignore the fact that the Canadian promise of stable, good jobs, with decent pay and benefits, even the possibility of a career, are well out of reach of more and more of us.

We ignore the truth that of all this is so plain and obvious we have to invent a whole new language to describe it. For example, the word “precariat” has been coined to describe an emerging class of people whose working life consists of scrambling to find short-term work to survive.

In the Greater Toronto Area and Hamilton, this is now half of the working population. Fancy new terms are being used to describe the situation: “gig economy,” "job churn," and the like.

More of the hard truth of what life at work is like these days, for those lucky enough to find some, was revealed in a recent CBC radio series called "Hard At Work." The series featured Ontario workers telling their own stories about their life at work. Their stories are eye opening and alarming.

Workers told stories of being paid $1.18 an hour; of being fired for no reason; of being cheated out of wages; of being expected to work for free; of part-time pay for full-time hours; of mental collapse and miscarriage.

“The elephant in the room is working full-time for no pay,” says one young worker, a student employed as an unpaid intern, who tries to survive as a restaurant server on evenings and weekends. To top it off, she has to pay tuition for the privilege. Universities, in fact, are serving as a cheap-labour conduit: Western University alone farms out more than 3,000 unpaid internships to willing employers. Further predatory abuse of interns—mandatory overtime, for example—adds to the misery. 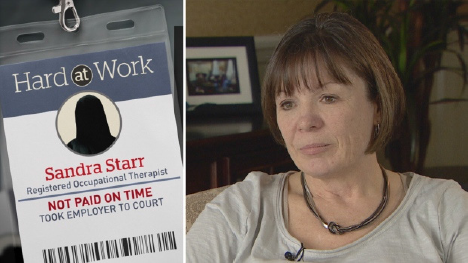 Sandra Starr, an occupational therapist, was let go by a contractor for complaining after they refused to pay her for weeks. Authorities threw up their hands. The police said it was a civil matter. Her MPP told her to lawyer up. The Ontario Ministry of Health said they could do nothing, because she was on contract. She finally had to turn to small claims court, where she won her back wages, interest and costs.

The uncertainty and stress of precarious employment over many years can literally drive workers mad. “I would be leaving meetings feeling like I was having a heart attack,” says Victoria Muir, “but I just stayed with the culture to work hard, stay quiet and not complain.” She was offered permanent work, but at that point suffered a complete nervous collapse—and a miscarriage as well.

How about part-time work that is actually full-time? A grocery clerk at Food Basics found that she was working regular 40-hour weeks, while being paid at the substantially lower part-time rate—30% less, for doing the same work.

These horror stories keep piling up. They make the truth about work harder and harder to ignore. So hard to ignore the Ontario government was prompted to launch a public process to guide a thorough revision of the Ontario Labour Standards Act to make the act better suited to the reality of work now.

While Ontario may be changing labour standards laws, the issue is, as always, enforcement. Unions can be a bulwark against abuses, but it’s an uphill climb even for them. And most work now—precarious and otherwise—is non-union.

“Get used to it,” says Canada’s Liberal Finance Minister Bill Morneau. Young people should expect a number of “career changes” during their working life, he says—or, put more honestly, they shouldn’t expect a career at all, just one dead-end job after another. If they’re lucky, they might even get paid.

How will we handle this truth

There is no denying this truth—the new normal. The wider issue, of course, is how we handle a disposable-worker economy, generated by years of government austerity, de-regulation and the rising inequality that inevitably follows.

Will we shrug and plod along? Or will we resist and demand a new truth that will offer real possibilities for a decent future for us and for our children and theirs. Our work, as we can see, is cut out for us.