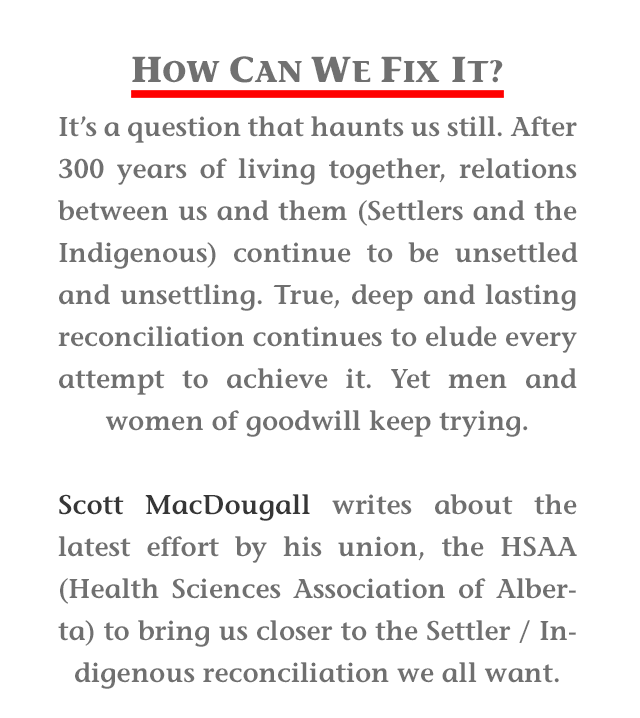 Countless injustices have transpired between Settlers and Indigenous people in the past three centuries many of which have not resulted in our proudest moments.

Indigenous communities suffer disproportionately from economic marginalization, high numbers of children in care, family violence, along with staggering rates of incarceration and suicide among their youth. On most social determinants of health and socio-economic indicators, Settlers have done disproportionately well compared to our Indigenous relatives.

Some would argue that we are now facing one of the biggest yet most silent civil-rights issues of our time. Many of us do not understand the backdrop any more than we know how we can be most helpful to change things.

Thanks to the work of the Truth and Reconciliation Commission (TRC), more Canadians have now been sensitized to the horrors of residential schools and the social, psychological and economic disruptions that have been inflicted upon Indigenous people as a result. What is less familiar to most Canadians, however, is the existence and mutual obligations of the Treaties and Treaty relationships that allowed foreign settlement in Canada in the first place.

Elders and scholars in the Indigenous world recognize that there can be no true reconciliation until there is an end to colonization. It begets both Settlers and Indigenous peoples to enter a more fulsome discussion of the Treaties and together sort out how to dismantle colonization myths, actions, attitudes and policies that are in violation of the Treaty relationship.

We must remember that treaties were the backdrop by which Settler people were permitted onto this land—complete with a generosity expressed by Indigenous people that allowed early European immigrants to survive in this part of the world.

Unionists ready to do more

As unionists, we have a tradition of standing up in the face of injustice for workers, genders, and economic inequality but, historically, we have been less attentive in how we join with Indigenous peoples.

Since the TRC’s call-to-action statements were released in June 2015, we have become more acutely aware of the ravages of Canada’s colonization policies and many unions now are making a special effort to acknowledge National Aboriginal Day and the traditional territories they stand on whenever they meet. Still, many in the labour movement struggle with knowing what else they can contribute—often with a sense of uncertainty about where we all go from here.

To that end, the Social Justice Committee  of the Health Sciences Association of Alberta (HSAA) is organizing The Walk for Common Ground 2019, in which union members, church representatives and Indigenous community members will walk 350 km from Edmonton to Calgary over 15 days between May 31 and June 14, 2019.

A core group of 30 walkers will be established to go the entire distance to facilitate community conversations in 15 different community venues. Registrations forms for those interested will be coming out in the coming month.

Members can also participate by attending the evening sessions or volunteering for support roles in their home communities where the walkers will be staying the night. Of course, members are welcome to join the walking group on the road as a day walker at any juncture.

This is an opportunity for union engagement from our social justice lens. It offers members the opportunity to think about our community responsibilities as a union, to enhance member understanding for future advocacy work on this important social issue and to create alliances across non-traditional boundaries.