WE TREAT MIGRANT WORKERS LIKE SHIT. We did when we brought them from China to build our railroads over a century ago. We still do when we bring them here today to work our farms. It’s the Canadian way.

In 2017, the government issued 79,055 work permits to workers in the Temporary Foreign Worker Program (TFWP). Most work their guts out on farms in Quebec, Ontario, Alberta and British Columbia.

Once here, they are essentially held captive by their employers. Those working on farms are forced to do heavy manual labour for long hours for sub-poverty wages and live in squalid and unhealthy housing. None of which much troubles the administrators of the TFWP.

To make matters worse, migrant workers are segregated from our permanent workforce. They cannot claim any of the protections under our labour standards laws—including the right to leave to work for a better employer.

Decades of efforts to change all this have achieved little. That only makes the UFCW (United Food and Commercial Workers Union) more determined.

The union is years into a die-hard campaign to bring justice and dignity to migrant workers. They have had some success. 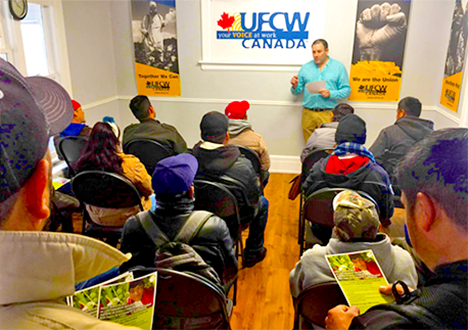 Pressure from the union led to a government committee recommending significant changes to the Temporary Foreign Worker Program (TFWP).

The recommended changes include:

There is also a proposal for Service Canada to increase inspections on problem farms.

This all sounds good. But, as Santiago Escobar, a UFCW staffer, points out the government has not yet indicated if the recommendations will be put in place.

There is no mystery about the abundant perils faced by migrant workers. The only mystery is why almost nothing has been done about it.

The same sad story of exploitation and abuse of migrant workers is as current as the April 2019 Globe and Mail exposé and as old as a 2014 academic study; observations made by Canada’s auditor-general and the House of Commons standing committee in 2009; and hours of evidence from migrant workers at countless consultations with federal government ministries going back more than a decade.

It is long past time to “move beyond hand-wringing to accountability and action,” says labour and human-rights lawyer Fay Faraday. It is also important not to confuse these attacks on workers rights as an unintended consequence of “human trafficking”, says Faraday.

She warns: “Examining this exploitation as the crime of ‘trafficking’ comforts us by suggesting that these practices are aberrant; that we just need to remove the ‘bad apples.’

“But this goes far beyond a few bad apples. The practices as outlined by The Globe’s investigation are a core business model that some recruiters adopt even while operating within legal migration channels."

She says governments have “constructed labour migration laws and policies that deliver a predictably exploitable work force to Canadian employers.”

Allow them to stay

The only lasting and just way to end the exploitation and rank abuse of temporary migrant workers is to accept them as potential immigrants and provide them with the opportunity to live here permanently as Canadian citizens.

Faraday recommends that: “Working-class workers should be able to immigrate to Canada with their families with permanent status on arrival so they can continue to contribute to our communities but do so with the security they currently lack.”

Other immediate changes needed to improve work and life for migrant workers include:

“For the sake of these workers, we can no longer claim we are shocked," says Farraday. “We must act in order to end the abuse.”

This is exactly the approach the UFCW has long embraced and steadfastly believes will win justice and decent treatment for migrant workers in Canada.