NONE OF US WANTS TO WIND UP AS SHARK BAIT. But a lot of us do.

Statistics show a lot of us get hooked by “payday lenders” with their loan shark interest rates. Susan Leblanc wants to use credit unions to give us a better choice.

Leblanc is an NDP Member of the Legislature in Nova Scotia. She has introduced a bill that would see the provincial government guarantee personal, short-term, “micro-loans” for amounts up to $2,000 from credit unions.

The truth is payday lenders meet a real need: many of us sometimes need a quick shot of cash to tide us over until payday—regardless of how much we earn or owe.

A Financial Consumer Agency of Canada (FCAC) study, found that “while payday loans are primarily used by those with low-to-moderate incomes... Twenty percent of respondents reported household incomes exceeding $80,000.”

But, the most frequent clients of payday lenders are people with low or no ready access to credit. In 2016, the Financial Consumer Agency of Canada (FCAC) polled 1,500 payday loan users. They found:

Payday lenders allow you to apply online or via a phone app. They’ll get you your cash in “10 minutes or less.” And if you prefer to arrange your loan in person, they have lots of bricks and mortar outlets. For example, while Tim Hortons has 20 operations in Cape Breton; payday lenders have 19.

So, payday lenders are convenient and they serve a need, but they also charge exorbitant rates. In Nova Scotia they are permitted to charge $22 dollars over two weeks for every $100 loaned—that’s an annual percentage rate (APR) of over 500%.

The business model depends on borrowers being unable to repay the initial loan on time and rolling the debt over into new loans, with all the attendant penalties and fees. The result is that some clients never emerge from debt (and may eventually be forced to declare bankruptcy).

The use of payday loans in Nova Scotia has been growing. The default rate has also risen—but the average value of a loan has remained steady at about $440.

According to Leblanc, there is nothing in her proposed bill that would stop the province’s credit unions from providing such loans now. Credit Unions already provide “lending options for smaller amounts.” But they also say competing with the payday lenders is a “risky endeavor”—which is why the Leblanc bill proposes a government guarantee.

Leblanc’s idea is really only extending to individuals the same kind of borrowing possibilities Nova Scotia already offers to business with their Credit Union Small Business Loan Guarantee Program.  Loans may be granted for up to 10 years and the province will guarantee up to a maximum of 90% of the value of all term loans. 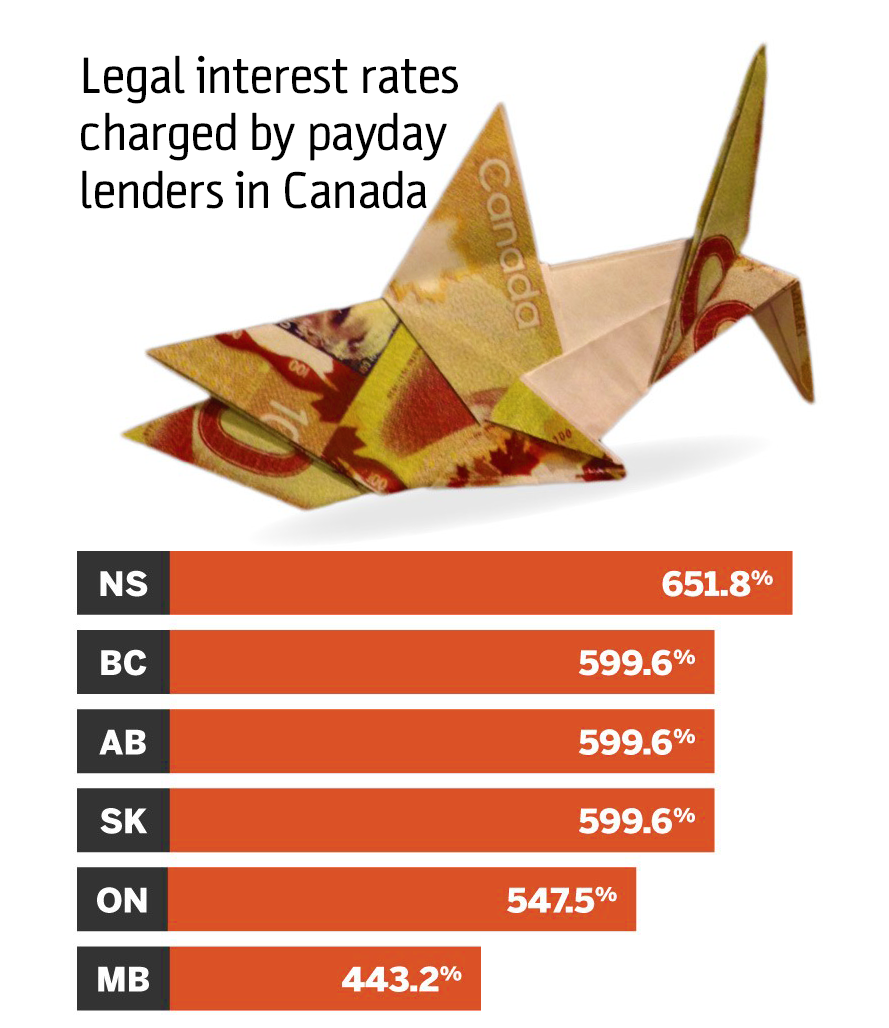 BC is already doing it

What Leblanc proposes is not a credit union first. The Vancity credit union in Vancouver offers a Fair and Fast Loan program in competition with payday lenders. The program, launched in 2014, is just another service offered by the credit union—the government does not guarantee the loans

Vancity’s vice president of credit and member support, Mo Ladak, says,“Ultimately, we saw a need in our community…with these various payday lender shops popping up on a lot of street corners and really gouging individuals…with their extremely high rates.”

The credit union did some research based on its own members and found that about 12% of them had a pre-authorized payment going to a payday lender.

For Ladak, this shows that use of payday loans is not limited to low-income or what bankers call “credit-challenged” individuals. Sometimes, he said, people resorted to this channel for reasons of “convenience or access” — they didn’t want to go to the bank or the credit union to apply for this type of loan because they “felt a little bit embarrassed” about needing it.

In August 2015, the credit union really began competing with the payday lenders with the launch of its online/mobile solution.

The online/mobile service removed the need for applicants to go into a branch and speak to anyone about their situation — loans could be “approved and funded within 10 minutes” and the result, said Ladak, was “exponential growth” in the program which now has a loan portfolio worth $9 million.

Fair and Fast loans range from $100 to $2,500 and the payback period can be anywhere from two weeks to two years, although the average is 12 to 13 months.

Vancity charges a 19% lending rate which Ladak says makes it similar to a credit card. Borrowing $100 for two weeks from Vancity will cost you about 80 cents. Borrowing the same amount for the same term from a payday lender would, under current BC legislation, cost you $19.

Ladak says the Fair and Fast loan default rates are“reasonable” in the “single digits,” and that although the credit union began the program with no expectation of making a profit, they are “not losing money.” They are, in fact, “a little profitable,” he said.

Vancity’s small loans are not guaranteed by the provincial government, but it has a membership of 525,000, with assets of $21.7 billion and 59 branches. Plenty big enough to survive any small loan defaults.

By comparison, in Nova Scotia, there are 24 credit unions with 145,603 members and total assets of $2.6 billion. Probably still big enough to absorb any losses from micro loans.

Leblanc admits there is next-to-no chance her bill will become law. “So what I hope is that people will think this is a good idea and get in contact with the Liberal government and say, ‘Listen, this is something whose time has come, we think you should call this for debate and pass this bill.’”

Unless and until that happens Nova Scotians will have to risk becoming shark bait every time they need to borrow a little something extra to tide them over until their next payday.