SOME PEOPLE CAMP OUT ON VACATION. Healthcare professionals in Montreal are camping out to get to have a vacation.

Members of the FIQ (Fédération interprofessionnelle de la santé du Québec) pitched tents to camp out in front of the Institut universitaire de gériatrie de Montréal June 2 to show solidarity for healthcare professionals who have not yet received replies about their vacation time.

The FIQ says they will stay camped out all summer, if that’s what it takes to get the institute to grant the workers the vacation time they are entitled to and deserve.

The FIQ is a union organization with nearly 76,000 nurse members, licensed practical nurses, respiratory therapists and clinical perfusionists working in health establishments across Quebec. Their members have been working non-stop on the frontlines of the COVID-19 fight for weeks on end.

The camp-in is only the latest in a series of demonstrations by the workers to draw attention to the fact they are tired of being tired and tired of being overlooked.

The FIQ says their members have the right to time off—and have more than earned it. Some employers don’t agree.

Healthcare professionals, who have been on the front lines for almost three months, have to have time to rest,” says Nancy Bédard, president of the FIQ.
Their physical and mental health depend on it. This rest will be beneficial for them and for their patients.”

The FIQ is in the middle of contract negotiations with government in Quebec. The government said it was “disappointed” in the FIQ public demonstrations. It is an example of what the FIQ calls “contradictory behaviour” from a government that asks the union to the bargaining table but then doesn’t show up.

“It says it thanks us,” says Bédard, “but then turns around and gives employers disproportionate powers via ministerial orders and comes to us with an unacceptable offer, without having even reworked it.” 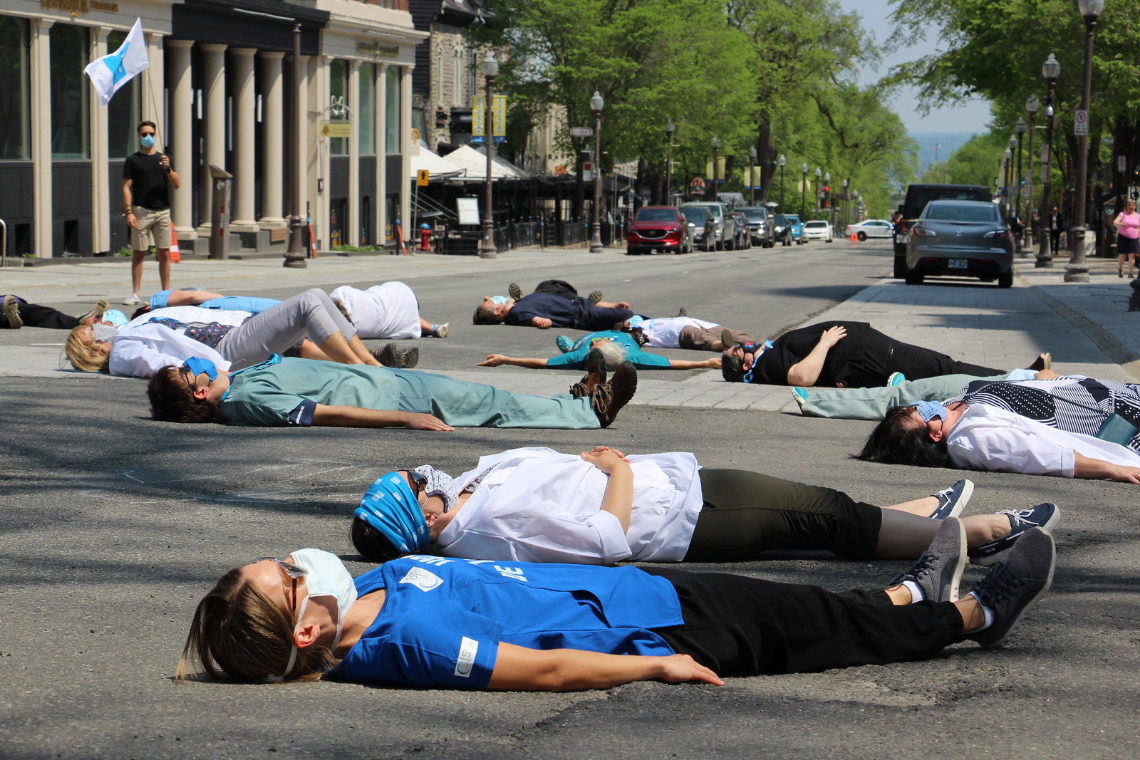 A right, not a luxury

Bédard says the pandemic crisis has revealed the healthcare system’s shortcomings and that the government is deaf to the healthcare professionals’ warnings and demands.

Not only have Frontline workers had to work without the necessary personal protective equipment, but the government ignored union contracts to legislate working conditions through ministerial orders that empowered individual employers to end leaves, statutory holidays, and to arbitrarily change work schedules and assigned workplaces.

Many regions are now out of lockdown, but healthcare professionals’ rights are still being violated.

Bédard says: “Faced with such indifference, attacks and attempts to divide us, we only have one choice: to unite to move forward and provide care. Right now, we are reclaiming our right to vacation time: it’s a right, not a luxury!

“We need it to get through this pandemic and to continue to care for patients. We are reclaiming ratios to be able to provide safe, quality care to the population.

“Negotiations are more crucial than ever. We cannot afford to hide behind the pandemic to delay necessary action that will resolve the situation. “

To challenge the government and make the population aware, the FIQ is continuing its campaigning. It recently launching a televised message with the theme “Let’s end the inhumane”.

“Healthcare professionals can’t take it any more,” says Bédard. “They have expressed heartfelt appeals for a long time now. Our television campaign is a reflection of being seriously fed up and they are at the heart of this message.

“ ‘Let’s end the inhumane’, means giving the workers back their rights, treating them other than as numbers and letting them give care humanely.”