Ariana Quesada, in front of RCMP post in High River, AB, with a photo of her dead father and little brother Aldrin

CAN EMPLOYERS GET AWAY WITH MURDER? Ariana Quesada thinks they did when Covid-19 killed her father. She thinks the police should investigate. So do the police. This is black-swan-sighting rare.

It is rare that a dead worker should attract that kind of attention. It is even more rare that the police agree the death deserves it.

Ariana Quesada, 16, started the move towards an investigation when she walked into the RCMP detachment in High River, Alberta, on January 8 and filed a formal complaint asking police to investigate potential criminal negligence in the death of her father, Benito Quesada

Benito Quesada was one of hundreds of workers at the town’s Cargill meat plant infected with the coronavirus In April 2020. The virus killed him on May 7 2020.

The Quesada family demand accountability from Cargill. They allege the company didn’t do enough to protect Benito from the coronavirus. The plant is the site of what was at one point the largest Covid-19 outbreak in all North America. 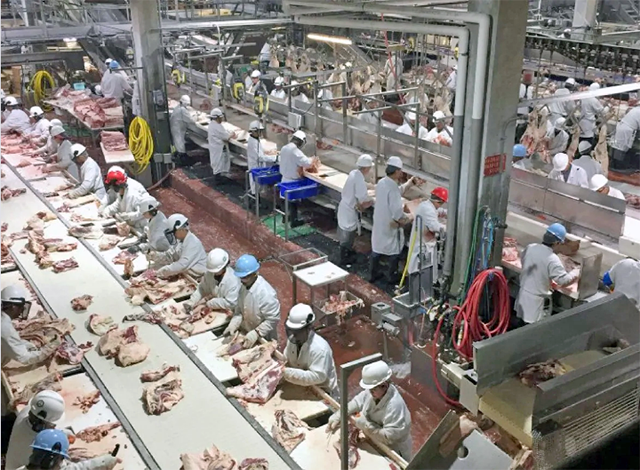 Inside the Cargill plant in High River, Alberta

The RCMP confirmed it has now opened an investigation.

“We have created a file, so to speak. An investigation has commenced,” Staff Sgt. Greg Wiebe, the detachment commander, told CBC News.

The promised Quesada probe will be the first known instance in Canada of police investigating a workplace-related COVID-19 death.

The complaint filed against Cargill cites the Westray Law, which was created in reaction to a deadly mining disaster in Nova Scotia in 1992, that killed 26 miners. The law provides for the criminal liability of corporations for workplace deaths and injuries.

There have been only six convictions or guilty pleas under the law in the 16 years since it was passed in 2004.

“Employers need to do far better than what happened in High River in the spring,” said Michael Hughes, a spokesperson for the United Food and Commercial Workers union, which has been helping the Quesada family.

The family says that while Benito Quesada isolated at home as a precaution and told family members to stay away from him. However, he continued to go into the infectious plant to work, lured by a promised $500 bonus that would have made a big difference for the family of six.

Cargill is also facing a proposed class-action lawsuit on behalf of individuals who had close contact with Cargill employees. They allege the company operated without adequate safeguards despite public health warnings.

Provincial workers’ insurance boards across Canada have only accepted 33 compensation claims for deaths from workers who contracted COVID-19 on the job, according to figures obtained by CBC News.

Ontario police have yet to investigate the deaths of Arlene Reid, 51, Sharon Roberts, 59, and Christine Mandegarian, 54. The three SEIU (Service Employees International Union) members all worked as personal support workers. They were killed by Covid-19 in April 2020.

Their union filed formal complaints alleging criminal negligence and failure to provide adequate protective equipment to staff. The union also accuses provincial health and safety officials of failing to ensure that the essential workers were safe.

“If this was a construction site, it would have been shut down immediately and investigated,” said Sharleen Stewart, president of SEIU Healthcare.

Police in these three Ontario cases have not opened criminal investigations—unlike the RCMP in Alberta. They have instead decided to pass them off to provincial coroners and the Ontario Ministry of Labour. Thus eliminating the possibility of criminal charges against employers and the serious penalties convictions can bring.

Stop the Killing is an ongoing campaign of the USW (United Steel Workers) to “hold people criminally accountable for the health and safety of workers.”

The campaign website points out: “Despite the power of the Criminal Code of Canada to hold corporations, their directors and executives criminally accountable for the health and safety of workers, not one person has been charged.”

The Steelworkers say they aim to change that by lobbying local governments and the public to support a broad effort to have Crown prosecutors and police scrupulously assess all worker deaths and workplace injuries for possible contraventions of the Westray Law and to “press charges if there is evidence of criminal negligence.”

Over 50 cities and towns across Canada have endorsed the Stop the Killing campaign: from Plymouth, Nova Soctia to Edmonton, Alberta to Burns Lake British Colombia to Toronto, Ontario.