THEY TELL US A RISING TIDE LIFTS ALL BOATS. THEY LIE.

They tell us the key to success is hard work. Everyone from Dr. Phil to Donald Trump to Mr. Belliveau your high school guidance counsellor says so. They lie.

We have been working hard, for a long, long time. And it shows. Productivity is way up—about 37.4% since 1979. But our reward for all that hard work has not been anywhere near the same. In fact, real wages have not moved in more than 30 years—unless, of course, you are at the very bottom or at the very, very, very top.

Work those differences out in real dollars and the gross inequality of the gap is revealed:

And don’t forget, 75% of us not only got no income growth at all—we fell behind.

Productivity, however, soared by 37.4% during those years. That’s more than 287 times the increase in our individual incomes.

Canadian Centre for Policy Alternatives research shows that the wage portion of the national income that goes to workers is now at its lowest level in 40 years.

If real wages had increased to reflect improved productivity and economic growth, workers could be earning an average of $10,000 more each year (in 2005 dollars), the study finds.

Economists call it “decoupling”: the fact that higher productivity does not bring higher wages. Common sense, and basic fairness, tell us that it should. But it doesn’t.

The reason why also turns out to be straight forward: after the rich, the very rich and  the very, very rich take all they want there’s nothing left for the rest of us. 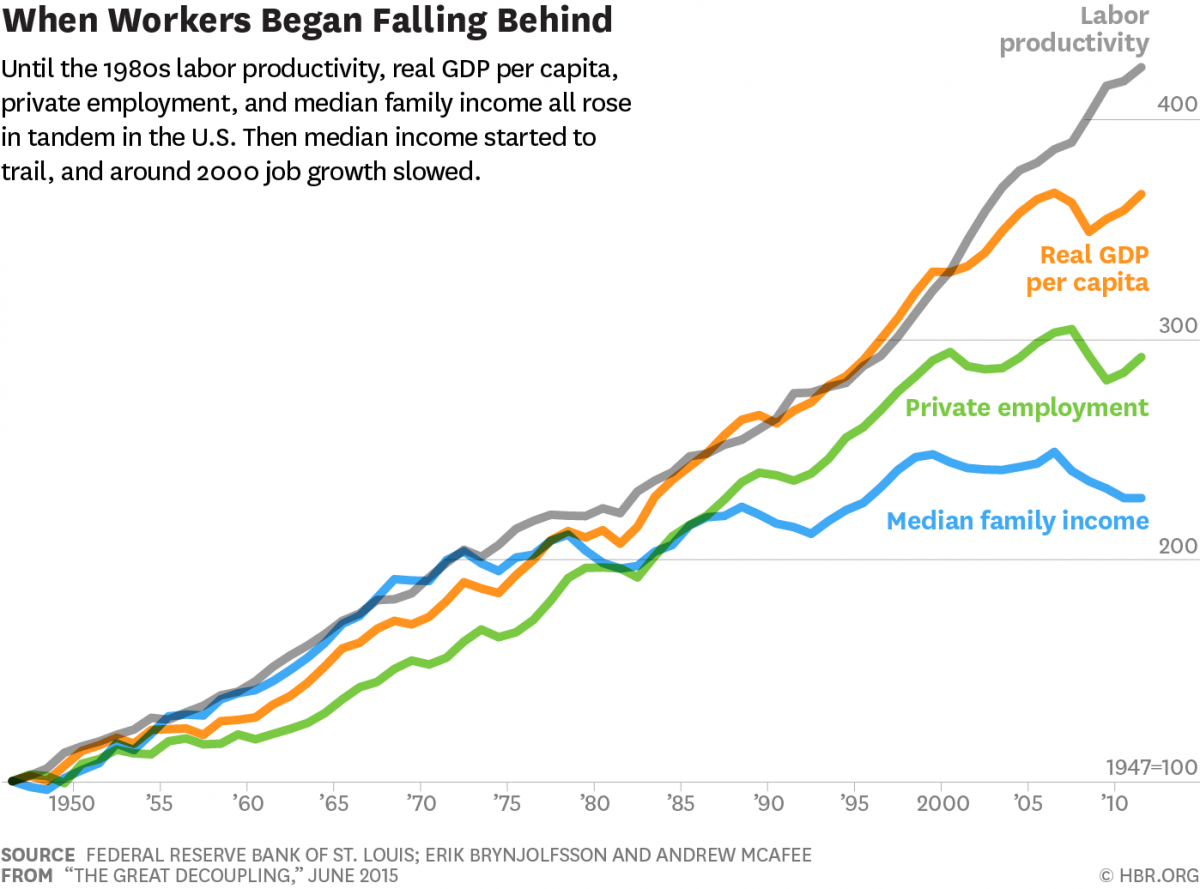 A 2017 study from the Organisation for Economic Co-operation and Development (OECD) found the disconnect between productivity and wages was due mostly to: “disproportionate wage growth at the very top of the wage distribution rather than stagnating median wages.”

The study points out: “the most striking development over the past two decades has been the divergence of wages of the top 1% of income earners from both the top 10% as well as the median of wage earners.”

Of, course those killing it at the top will say that they deserve what they get as a reward for being as highly-skilled as they are. But, the OECD study points out: “skill-biased technological change and globalization cannot plausibly account for the disproportionate wage growth at the very top of the wage distribution.”

What is more, if highly-skilled workers were in such high demand there should be a rise in the wages of all those workers. There is not. The rise in wages is confined exclusively to the very top-earners.

The truth is digitalization leads to “winner-takes-most” dynamics, with innovators reaping outsize rewards. This type of technological change may allow firms at the technology frontier to raise the wages of its key employees to what the OECD study calls “superstar” levels.

For those who had unique skills, this became a golden age because now those individuals were able to sell their talents around the world, amplified by technology. So this is when we see inequality begin to soar.

An extreme example of the superstar phenomenon is J.K. Rowling, the author of the Harry Potter series. She was the first person to become a billionaire by writing books, a reality made possible by the new market forces which greatly expanded the distribution of her books across markets.

There is nothing magical or inevitable when it comes to the widening gap between productivity gains and wages, however. It is simply a cash grab that the rich and their friends in government combine to pull off by applying brute economic force. No magic required.

MEDIAN WAGES AND PRODUCTIVITY
GROWTH IN CANADA AND THE UNITED STATES

DECOUPLING OF WAGES FROM PRODUCTIVITY