Activists rally against gold mine proposed for Melrose, NS

COVID-19 SEEMS TO HAVE A GOLD LINING IN NOVA SCOTIA. TV ads promoting the glories of gold mining pop up on TV in Nova Scotia now with as much regularity as McDonald’s ads used to. The ads feature a bevy of smiling workers touting the benefits of working at the Tuoquoy gold mine in Moose River about 95 kilometres northeast of Halifax on the Eastern Shore.

The mine is still in full operation. The way the mine owner’s, Atlantic Gold, see it, this is just one more example of the good Atlantic Gold is doing for all Nova Scotia. The company sent out a “special notice” to communities along the Eastern Shore to drive home the point.

The bottom line is their only priority

In the special notice, the Atlantic Gold president writes: “Our priority is to safeguard the continued health and stability of our staff while ensuring our operations remain safe and environmentally responsible.”

Investigative journalist Joan Baxter noted: “Atlantic Gold’s ‘priority’ is its bottom line, which is why it is still operating its gold mine in this time of COVID-19....The coronavirus crisis...is also driving the gold price up, creating a windfall for gold producers. Governments can print currency; nobody can create gold”

The promise of instant prosperity with gold mines is a delusion says Baxter, who once reported from Mali on the most profitable open-pit gold mine in the world. “I’d like to point out that Mali is one of the poorest countries in the world. If gold was going to make Nova Scotia rich, we would already be a really rich province.”

In 2017 Atlantic Gold extracted $24.9 million worth of gold from their Moose River mine. Yet the corporation paid nothing in taxes and royalties to any level of government.

It’s a business success that looks good on paper and in TV commercials but hides a reality far less rosy. The fact is, the long-term economic benefits are small, while the potential for long-term environmental damage is large. Not to mention how home owner and basic civil rights are casually ignored and flagrantly denied to give the gold miners everything they want.

There is a gold exploration and mining rush in Nova Scotia right now.

Atlantic Gold has plans to add three more mines—what it calls its “string of peals”—running 114 kilometres from Moose River to Cochrane Hill near Canso. Other gold mines are operating, and more are planned, along the Eastern Shore, as well as on the other side of the province near Tatamagouche. Companies from many countries including Chile and China are prospecting in many other locations.

The provincial government is always eager to smooth their way. The reason they give for this is always the same: the potential “economic benefits” to the people of Nova Scotia. The truth is the supposed economic benefits are limited, while costs to the environment and individual personal rights to the quiet enjoyment of life are high.

In the 2018 the Nova Scotia government announced the creation of the “Mineral Resources Development Fund” to hand out $700,000 to “increase mineral exploration and mine development.”

In 2008, the approval of the Moose River gold mine was conditioned on the mining company giving the province hundreds of acres of conservation land within four years; 12 years later, there’s still no approved plan in place.

Mine operators claim their mines will put two or three hundred people to work. Problem is, such claims are usually an exaggeration and what jobs are provided will end in four to six years when the mines are played out.

However, the costs of dealing with the toxic mess the mines create runs into the millions. Cleanups of two decades-old gold mine operations—so toxic the sites are closed to the public—are now underway at a cost of $48 million.

Nova Scotia law allows anyone to stake a claim to explore for minerals on any property—without notice to or permission from the private landowner. Wayne Oakley objected. He went to court to stop Atlantic Gold from forcing him out of his home and off his land. He lost. His land and home was expropriated to make space for the Moose River mine.

The NDP government issued a vesting order in 2012 allowing the mining company to expropriate a family-run Christmas tree operation that had been in the Higgins family for 120 years.

The open pit mines are scars on the landscape. They are ugly, noisy, dusty and vast. The Moose River Mine is an open pit one kilometre long, one half a kilometre wide and as deep as a 50 story building is high. It will be there forever, so will its tailings pond and so will the need to monitor the toxic pond—forever.

In January 2019, a leak at the Moose River Complex spilled 380,000 litres of waste. The proposed mine in Melrose will be dug on a hilltop. The plan is to create a tailings pond with a 70-metre-high tailings dam on the hill.

The proposed Cochrane Hill mine would also necessitate the realignment of nearby Highway 7, sending it through protected Nova Scotia Nature Trust land.

The injury to the landscape is bad, but what troubles people even more than the potential for damage to their own immediate environment is harm to specific environments already under care.

The activists fear all that will be lost if Atlantic Gold gets a permit to start open pit mining at Cochrane Hill close by the river. When activists quietly attended an Atlantic Gold  “public information session” on the proposed mine last summer the corporation had the RCMP remove them.

The scars and rifts the arrival of the mines creates in the communites are not so visible, but they are real. 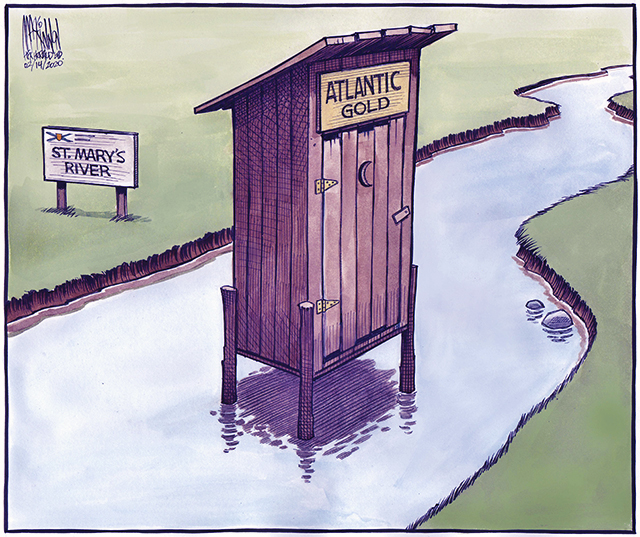 The river association started a NOPE (No Open-Pit Excavation) campaign to battle an enterprise they believe will be fatal to the river. They have held rallies and protests. NOPE lawn signs decorate many front yards in Guysborough county.

David and Patricia Clark don’t know what will happen to their property. If the Cochrane Hill mine opens their land could be expropriated. It happened in Moose River. “It’s like David and Goliath, only we don’t have any illusions we’re gonna win,” says Patricia.

“You want to sum it up?” says Harry Kelly of Moose River. “Dump trucks, dust, devastation. That’s basically what our life is now.”

Harry conducted a Facebook poll to measure feelings about the mine. The result was not conclusive: 822 people voted; 58 percent were for the mine, 42 percent against. Not all voters were locals.

Meanwhile, it seems nothing can stop the rush to mine gold in Nova Scotia. Not even a worldwide pandemic.