Rally for rent control in Halifax on November 7

CANADA COULD USE A LITTLE JIMMY McMILLAN and his The Rent Is Too Damn High Party right now.

Jimmy was the founder and leader of The Rent Is Too Damn High Parity. He ran for governor of New York in 2006 and 2010 and for mayor of New York City in between. His party’s name was his whole platform. He didn’t win. But he made high rents a burning issue and populist outrage a force politicians had to reckon with. More and more renters in Vancouver, Calgary, Toronto, Montreal and Halifax are beginning to catch a little of that Jimmy McMillan spirit. 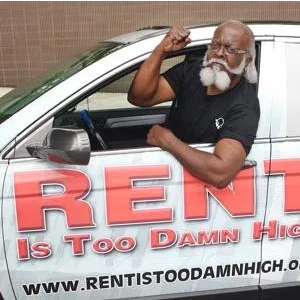 Jimmy McMillan on the campaign trail 2010

You could see it among the 400 folks at the Rent Control Now! rally in front of Halifax City Hall November 7. They gathered together to first share their stories of landlord neglect and rent-gouging and to demand government action to close the power gap between renters and landlords. Then they marched the two blocks to Province House to call on the government to reinstate rent control and curb the housing crunch faced by Nova Scotians.

Renter activists also held a rally on November 7 in Antigonish, a university town about 160 kilometres northeast of Halifax.

The two rallies were organized by ACORN Nova Scotia, a membership-based community union of low- and moderate-income advocates for rent control and landlord licensing.

Fabian Donovan is a 62-year-old on a fixed disability pension. He told the Halifax crowd he’s had months where he’s had to choose between medication, food and rent.

“I don’t know what we’re going to do in the future if this isn’t stopped,” said Fabian. “At my age, I might have another 20 years or so, but it’s the next generation coming up that I’m concerned about.

“I’m doing this for my kids, my grandkids, your grandkids.”

David Comeau told the crowd how the house he was renting failed an inspection and when he asked his landlord to make the necessary improvements, the landlord simply refused to renew his lease.

“There needs to be something in place to stop “renovictions”, where the only way they can get you out is to say they’re going to renovate the property, followed by $600 or $900 rent increases, and you have to leave,” said Comeau.

“Especially when you’ve got people in political parties saying that rent control doesn’t work—end of story. But they’re not explaining why. We need an explanation.”

Exorbitant rent increases in Nova Scotia aren’t limited to big cities like Halifax. There are only 5,000 residents in Antigonish but rent increases of $600 a month are now a reality in his small town, says Chad Brazier, who is trying to organize a local chapter of ACORN.

“I’ve lived here for eight, nine years. In that time I’ve seen landlords buy up houses, and convert them into four or five units per house. The rents only go up,” Brazier says.

“The guy that I see at church every Sunday, the last three or four Sundays he’s asked me if I know of any unit in town here with internet access, says Chad. “He has a small boy and the boy needs the internet for school, and there’s no internet where he lives outside of town.

“They’re doing a lot of development here in Antigonish, you can look up and down Main Street here and you will see the storefronts, with the rental units above them. But those are all for professionals, or students who are putting it on their credit card. They’re not for low income people, not for single mothers with their family.

“They’re not building the kind of housing we need, and we’re not forcing them to.” 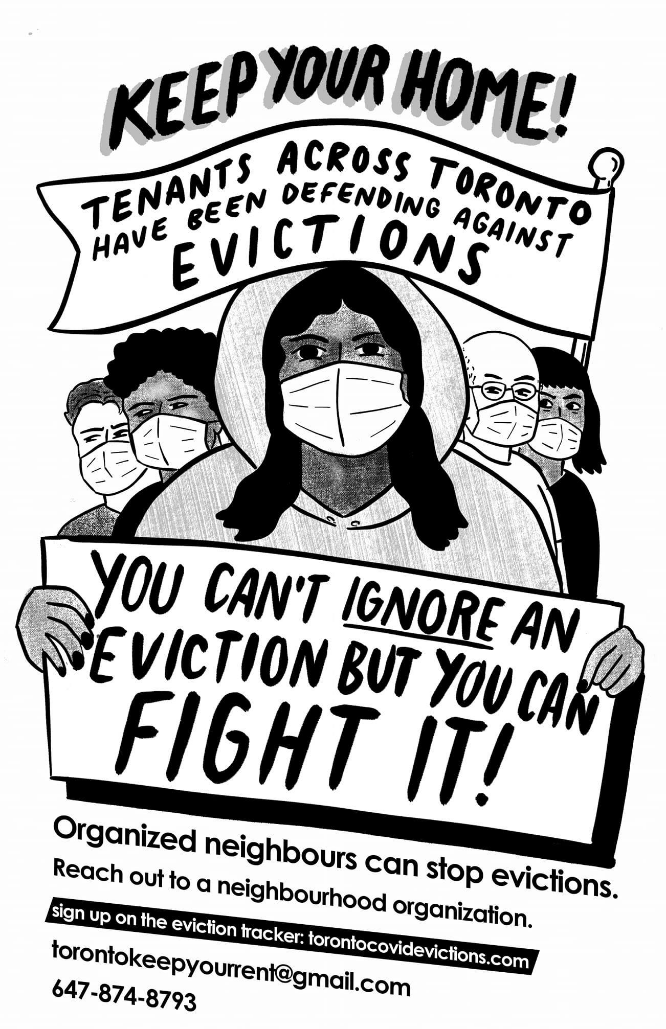 Renter activism in Toronto is alive and kicking in the 6,000-member Keep Your Rent Facebook page and website. Their strategy is to depend on themselves, to build “tenant-to-tenant solidarity not lobbying, petitioning or negotiating with politicians or landlords.”

The Keep Your Rent (KYR) website reminds renters they are neither alone nor powerless. It offers information on what renters can do to protect themselves and boosts solidarity: “We do not need to hope and wait for politicians and landlords to come to their senses in order to put an end to this crisis.

KYR urges renters to take direct personal action: to talk to neighbours and share phone numbers, addresses, unit numbers and emails; to build phone trees for neighbours to stay in contact, discuss plans and make decisions; to distribute flyers and posters; to “spread the word that neighbours are willing to support anyone facing eviction.”

The KYR site also reminds tenants that they always have the power to take direct action against the landlords and lawyers “that apply for evictions and threaten our homes”.

“As long as they threaten ours homes,” says the website, “they will not be allowed to sit comfortably in theirs. We can find where they live and work. We can go to them directly and demand their threats stop.”