THE DEMAND FOR DECENT WORK IN ONTARIO AIN’T OVER TILL IT’S OVER. That was the message thousands flooded into downtown Toronto to deliver to the brand new Doug Ford government in Ontario, just nine days after his June 7 victory.

The rally put Ford on notice: there would be no backsliding. The important labour law reforms in 2018 that came with the passage of Bill 148: Fair Workplaces, Better Jobs Act must be honoured.

“The people of Ontario expect a $15 minimum wage on January 1, 2019 and you can see from the crowd that I am not alone,” said Yvette LeClair, a Toronto worker. 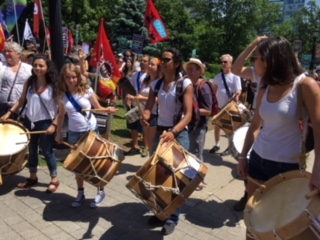 “Like so many people I know, I’ve been juggling two and three jobs, with no benefits for too long. The $14 minimum wage, the right to equal pay for equal work and the paid sick days that came into effect this year are making a big difference, but I, and millions like me, are anxiously waiting for the increase to $15 and fairer scheduling rules.”

“We’re going to make sure Ford gets our message,” said Marco La Grotta of Fightback. 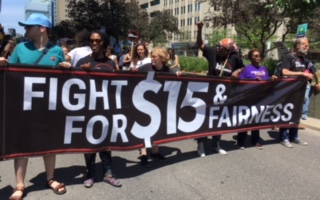 Melissa Graham, a disability activist, stated her concerns: “For me particularly as someone with a disability it’s a little scary and for all of us depending on social assistance. I think in Ontario we’ve never really recovered from the Mike Harris years. I think we’ve tried to hold everything together with duct tape and toothpaste. More cuts would be a disaster.”

“Ontario’s labour movement wants to be sure one thing is clear to everyone: a $15 minimum wage is a better deal for workers than a tax cut,” said Ontario Federation of Labour President Chris Buckley. 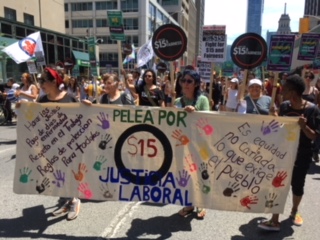 The rally was a high energy event. There were drummers and chanting—but most importantly, there were actions by individual activists.

As the march headed up University Avenue to Queen’s Park, the massive flow of people stopped traffic going both ways. Activists were quick to take advantage of this opportunity to approach the stranded motorists and talk to them about the goals of the march and their concerns for Ontario’s future. Most drivers and passengers seemed willing to engage in these conversations, often asking questions and nodding in agreement.

Union members came out in droves. Union member Janis Daly felt we should all be demanding more. “Minimum wage is crap. Going up to $15 is nothing when CEOs during the same period earned 300 per cent more!”

We asked protesters what they were planning to do to make sure Ford delivers on a decent work agenda. “We’re going to continue to mobilize, to fight him” said Marco La Grotta.

“If we can’t do it on the electoral front, we’re going to do it in the streets. And we’re going to continue bringing out as many people as possible to make it loud and clear that we do not support this government.” When asked if he thought Ford would listen, Marco La Grotta was blunt.

Melissa Graham was also optimistic. “I think we can make him change course! Back when his brother [Rob Ford] tried to privatize Wheel Trans, he was forced to back down. I think we can do it again.”

The Rally for Decent Work was one of the first major protests after the provincial election, but it’s definitely not going to be the last. Fight for $15 and Fairness will be joining with other activists to make sure their message decent work message is kept front and centre. Graham’s organization, Toronto Disability Pride, will hold a march on September 22nd to promote the rights of individuals with disabilities and others who suffer from oppression and discrimination.

“We were so close to making progress on affordable housing, especially for people with disabilities, and then this happens. We’re going to make sure he hears us loud and clear. We know what he’s about and we’re not going to let this happen. We’re not going backward.”

Activists, unions, and everyday folks are mobilizing all over Ontario. If Ford doesn’t change course, they’re going to make sure that this is one long, hot, uncomfortable summer for him.