A disguised 'Halima Alari' in a Global TV interview

“WHY DOESN’T HE JUST KILL YOU?” Halima Alari* had no answer. But, being alive didn’t help. The man with the gavel just took it as more proof that she was a liar. It was enough for the Immigration and Refugee Board (IRB) judge to reject her claim to enter Canada as a refugee.

Halima told judge Yonatan Rozenszajnat  at her April IRB hearing that she fled Nigeria to escape more than a decade of beatings by her husband. Rozenszajn refused to believe her—contrary to IRB guidelines directing that refugee claimants must be “presumed to be telling the truth” until proved otherwise.

If you were dead I’d believe you

Rozenszajn repeatedly asked Halima why her husband didn’t kill her instead of beating and harassing her for years. Rozenszajn said he didn’t understand why these beatings continued even after Halima left her husband and moved to a different city.

Halima tried to answer Rozenszajn’s questions by explaining that her husband beat her because he wanted a boy and she had only given birth to girls.

But Rozenszajn persisted, asking her the same or a similar question four times in a row.

“If he really wants you to be gone, why doesn’t he just kill you?” he asked.

Rozenszajn ended up rejecting Hlima Alari’s refugee claim. He said he found her untrustworthy. He also dismissed a psychological assessment that diagnosed her with post traumatic stress disorder. 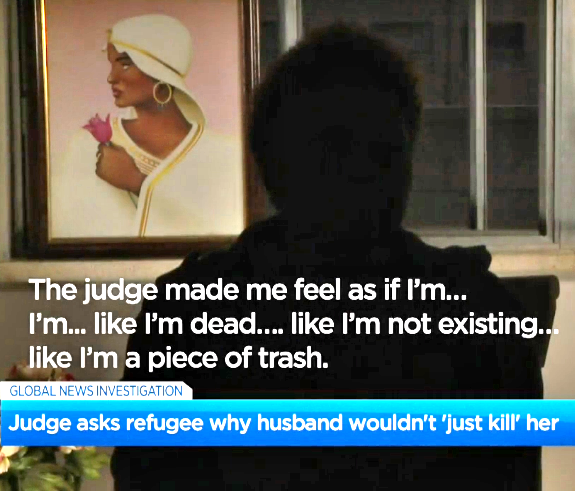 Halima says Rozenszajn’s questions made her feel worthless. “How can a fellow human being look at me and ask me that, why are you not dead?

Playing games with the guidelines

Sean Rehaag, director of York University’s Centre for Refugee Studies, says it’s not uncommon for refugee judges to take a “check the box” approach when applying the board’s guidelines to their written decisions.

This means judges acknowledge the guidelines exist, often mentioning them by name in their rulings, but then, as Rozenszajn did, failing to explain why they do not apply to a specific case.

Rehaag says some refugee judges use this approach as a way of "appeal proofing" decisions — meaning that because the guidelines are mentioned, their rulings are more difficult to overturn on the grounds that the guidelines were not considered.

Strong public criticism has led the IRB to review the Rozenszajn decision against Halima Alari. Serious concern over who gets to be IRB judges and who they have to answer to is nothing new.

In 2018 Parliament was concerned enough to hold a review of how the board handles formal complaints made against its own members.

The IRB has many responsibilities, including deciding who needs refugee protection among the thousands of claimants who come to Canada annually. The IRB is also Canada’s largest independent administrative tribunal—which makes it one of the biggest “pork barrels” in Canada. There are close to 200 “members” of the tribunal, most getting salaries of at least $165,700 a year. All are part of the “old boys club” of mainstream politics.

The administration of justice by the IRB is extremely uneven. Global News reported that in the last three years, adjudicators at the IRB Toronto office rejected 63% of the vulnerable person applications they received. The Montreal office rejected 22% and the Vancouver office rejected 6%.

Most claimants were denied by 30 Tory-appointed board members. And one Tory appointee, David McBean did not approve a single refugee claim in the 169 cases he heard. McBean got a second five-year term.

Lubomyr Luciuk was an IRB judge from 1996 to 1998. He is a professor of political geography at the Royal Military College of Canada. Luciuk prided himself on being called “Dr No,” because he rejected 90% of refugee claims he heard. He boasted he “rarely encountered a real refugee.”

In 2001, Luciuk wrote an op-ed article that appeared in four Canadian newspapers “How ‘Refugees’ and Terrorists Get into Canada.” In part he wrote:

“Be a liar.… repeatedly [insist] that you face nothing less than torture or even martyrdom if you return. Repeat this mantra. Practice looking downcast. Cry. Unless you are an utter imbecile you stand an excellent chance of getting … refugee status in Canada.”

The IRB made him a tribunal judge again in 2018. Once informed of the 2001 article, the IRB decided not to renew Luciuk’s contract for 2019.

Currently there are 38 vacancies for IRB chairpersons.

Those open to following guidelines need not apply.

* Not her real name